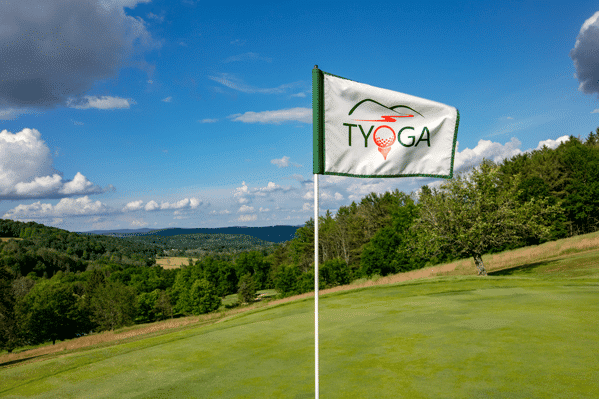 In this interview, Shawn Bryant joins Home Page Vice President Sara Vogt in the studio to discuss the acquisition of the Tyoga Country Club by GROW. Mr. Bryant currently serves as the President of the Board of Directors for Growth Resources of Wellsboro.

Mr. Bryant explained that GROW is a non-profit organization consisting of business and individual members whose main goal is the promotion of economic development activities in Wellsboro. He became involved with GROW because his business, The Penn Wells, is a long time member.

GROW has been involved tangentially with the golf course for many years. In the late 70s when Tyoga was expanded from 9 holes to 18 holes, GROW participated in the project to help obtain low-interest government loans to finance the construction. In the past 3 years, GROW has provided through grants or loans $220,000 to keep the golf course running.

In recent years, there has been a downturn in golf play nationwide. That has been true in Wellsboro and it has affected Tyoga’s finances. One issue very generally speaking has been that younger golfers don’t spend as much time playing golf. And there are more golf courses as many new courses have been developed in the last few decades. This has affected Wellsboro because in the 1980s Tyoga was at the forefront of opening its course up to visitors. Today, there is a lot more competition for a more limited number of golfers. Finding it hard to make ends meet, the Tyoga Country Club started exploring the possibility of selling the course to a private buyer, but there was concern that if sold – Tyoga might be turned into something other than a golf course after the purchase. TCC didn’t want to see that happen and neither did GROW due to the positive impact the course has on the local economy as a whole. So GROW agreed to step into the shoes of TCC.

GROW’s plan for Tyoga in 2020 is to get the course opened for the season as normal and get as many people out to play golf and enjoy the course as possible. We have put in place a separate Tyoga Board that will oversee the functions of the course. For the former club members, Tyoga will again have unlimited play options for an annual membership fee. Tyoga will be welcoming the general public and visiting, golfers, for daily play as always. There will be the usual plentiful amount of tournaments, and the Bar and Grille will be open. For golfers, you should be able to enjoy the golf course in 2020 just the same as you did in 2019.

GROW’s long term goal is to maintain Tyoga as the great golf facility it is and make it even better. A definite priority is to make new golfers feel comfortable about starting to play. Tyoga will be a truly public course and no one should feel shy about coming up to play. Also, GROW will look at other ways that Tyoga can be used as a recreational asset to benefit the community. GROW will also provide marketing dollars to attract more people to visit to play the course.

GROW is about the notion that Wellsboro is great to place to work, live, and play.

To encourage employers and workers to live here, assets like schools, shops, restaurants, and, yes, recreational assets like the golf course all play a part. Also, Tyoga has long been a popular reason for visitors to come and stay in Wellsboro. Those visiting golfers help out the economy by patronizing local businesses.

The following paragraphs tell of the history of GROW along with the other projects they help to finance. GROW began in 1956 as the campaign Operation GROW – Dresser Industries indicated a willingness to open a new plant in Wellsboro if Wellsboro contributed $180,000 towards the development of the site in 10 days. Certainly, that was a lot of money in 1956, but a community fundraising effort exceeded that goal by $50,000, and the Dresser plant was built and opened in a matter of months. Over the years, GROW helped out with several similar efforts.

They also purchased the Tioga Central Railroad line from Conrail in 1992. Conrail had announced they were going to abandon the line between the Corning-Painted Post area and Wellsboro. Local businesses like the glass plant used the line, and GROW was concerned about what might happen if rail service to Wellsboro was cut off.

GROW has assisted in various ways with several community economic development projects over the years. It bought the Mergenthaler plant when it closed in the early 80s, and then sold that to new owners, currently Truck-Lite. GROW has no ownership of the Airport, but did help with the creation of the current Airport Authority to maintain the facility when the State gave it up in the early 90s. GROW has provided some funding to the Airport in the past, and GROW has also contributed to the Hospital emergency room project and the Wellsboro High School athletic field project in recent years. Grow is also very supportive of the efforts the County has been making toward extending the Pine Creek Rail Trail into Wellsboro, and we are doing what we can to coordinate the railroad with those efforts.

No comments to show.